Seeking marriage proposal from a hot rich man who knows how to sail.

It was day one of my Hawaii experience. A week of training a very cool division of the military, a group called JPAC; they’re primary focus, to find our MIA’s. My task was to work with their photography unit in sharing new techniques, ways of creatively seeing and methods of directing.

My promise was standing, no matter where I was, 365 would roll on wherever I was, and staying at the Hilton Hawaiian Village, I felt a little spoiled. It was a very nice hotel and resort. I know, poor me, what a terrible place to have had to go to work. I confess it was rather comfortable. But to put it all into perspective, my family was still on the mainland, it was Saturday night and all I was doing was meeting strangers and writing blog essays.

It was the end of day one of training, and I had finally got settled into the hotel around 4pm. Took a quick shower, grabbed my camera and took off to shoot 365.

Loitered the resort lobbies for about two hours. No one stood out. Talked to lot of people, yet never felt the burn to photograph them. All was life is great, we are on vacation stuff, and something about that topic just seemed so insincere to write about.

There I was, wandering the Hilton, a melting pot of people from around the globe. You would think the possibilities would be endless. I was stupefied. Everyone looked the same–tourists on vacation. Told myself that the next day I would investigate more deeply, thinking, surly I had missed something. But I pushed forward hoping to find a topic of substance. The last straw hit when I came across a teen, who without breaking a beat, jammed her finger in her nose and seamlessly cleansed it in her mouth; an act of slyness that drove me out of the hotel lobby and to the beach path for a little fresh air.

It was my first glimpse of the beautiful afternoon, 7p.m as I hiked the bike path, fielding a few phone calls as I worked to drop the vision of the nose meal I had just witnessed.

Right in front of me was KBS, a fun surfboard and stuff hut. My intuition began to tell me, “stop! We’re there.”

Happy I listened. I met three locals, raised on the islands, all very fun and gregarious. We laughed more than I could write. With quick wit, I found them smart and loving life to the fullest.

Say “aloha” to Alexis, Joshua and, Dalante (not pictured), who was more of a cheerleader to the shoot with an onslaught of harassment, and in tribute to their wacky sense of humor, their introductions, on-line dating style:

Alexis: Seeking marriage proposal from a hot rich man who knows how to sail.

“So what if Dalante thinks I have a giant head, that’s his problem, you marry me and you’ll be glad you did. I promise you’ll never have a boring moment: Surfing to cooking, bedroom to barroom, I’m your gal. But if you think I’m a pushover or a lush, your way off-base. I’ve always been told that my personality is awesome and I’m a ten. People love my spunkiness, enthusiasm, limber limbs and flexibility. So what if Dalante is bagging on my head. His loss. Oh yeah, almost forgot, I’m kind of a big deal. People know me.”

Joshua: “Do you want to come on my yacht.”

“Hey, I’m ready to settle down, I think? Been on the islands my whole life and know them like the back of my hand. If you like surfing and fun in the sun, part of me is your guy. Yeah, I’ve won the state championship three times, but you need to know the other side. Nothing can stop me, and Hawaii Pacific University is my second big wave: Environmental Engineering. I see three kids in the future and life is good. I’ve got nothing bad to say. Well, maybe a few more girls from California or Colorado, or perhaps a hot Russian girl before I finally settle down.”

Humor really is key in life. The caricatures above are an outcome of the outrageous part of our conversation. Here is what really struck me about these guys. They were real. What you saw was what you got, and what you got were true friends who stuck together. I witnessed it in the way they treated each other–with great respect. I caught that message loud and clear the second we started to talk and I was uplifted by their example. 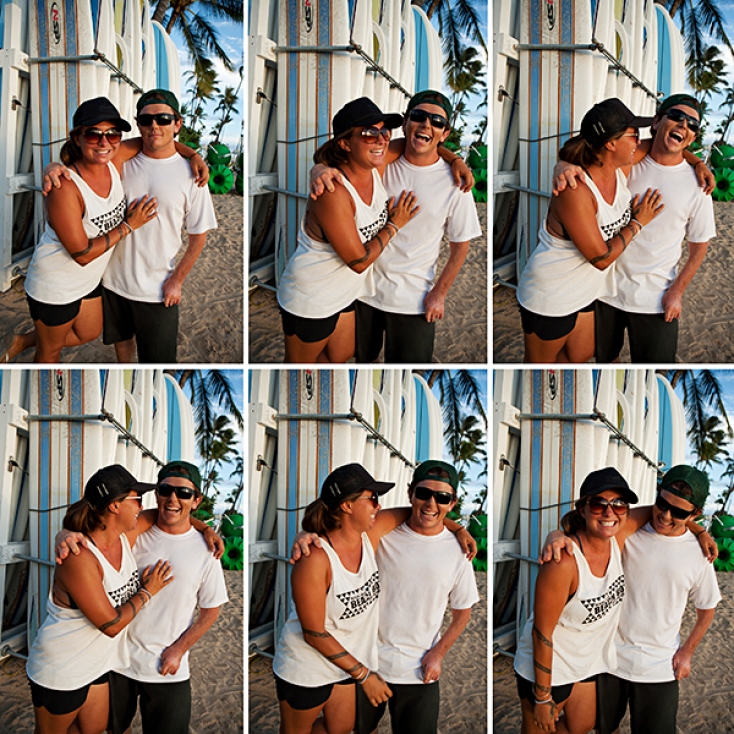 Alexis was an extremely smart gal with a wonderful outlook. A little self-boasting, but it was all in jest. Dalente said, “She is kind of genius.” She accepted the dig without a flinch in completely agreeing with him. I joked with her saying, well that just proves you’re humble, you know you are a genius, so why be rude and hide it.

I had tremendous respect for Joshua. He was the poster man for overcoming obstacles. You see; he was born with embryonic banding. I’m no doctor, but in my layman’s description of the syndrome, the condition occurs when the umbilical cord wraps around the baby’s body. This restriction in blood flow causes developmental issues and can be fatal. Joshua carried the badge of honor with his underdeveloped hands and arms. Neither of which slowed him down or discouraged him at all. He was warm, intelligent and one heck of a world-class athlete–again, three time state surfing champion, a tremendous achievement for someone living in one of the surfing capitols of the world.

Per the above story, I had written it after having been up for almost twenty-four hours. My eyes were blurry as I typed away at the keyboard, 11:19pm Hawaii; that was 2:19a.m mainland time, the clock I was running on.

Still early in the project I had not yet found the full voice of what it was to become, but humbled I was learning the first lessons in how to absorb the world around me. The weeks to come in Hawaii proved to unveil some profound and inspiring moments. Keep reading, a big reveal in almost here.