Menu
BACK TO BLOG
PrevPrevious“Is The World Better Because I Was In It?”
NextMy Story Of FairnessNext

From the archives of Project 365

Day Of The Dead, Dia De Los Muertos: A holiday focused on praying for, and remembering, friends and family members who have died. It’s a big deal in Mexican culture and a huge day of celebration.

It was on that particular day I decided to explore a busy festivity in my nearby Canoga Park. Six city blocks of food, music, and street vendors, that regardless of sporadic rain, ware overrun with a multitude of people, many covered in costume and face paint. From partying groups to calm families, and everything in between, they all congregated. Each a potential prospect to interview, but for some reason, I was not drawn to approach anyone. It was very strange to be in a place with so many people, and yet, not pulled to a single person. I looped the neighborhood several times, no one was I inspired to reach out to. My ears were beginning to ring from the volume of the stage band performing. A full volume deluge flying over my shoulder, I readied to find a new path. But as quick as I made that decision my stride was broken as I was drawn to a man of great stature. Wandering beneath the blast of loudspeakers, I invited him to be interviewed. At first, he was not interested, but as his wife, who standing by his side encouraged him, he embarrassingly accepted.

The music was screaming, which made it very difficult for us to communicate. We dug into our voice boxes to raise our volume and managed to exchange a few words. My new friend Wence was another fellow photographer (two days in a row I had spoken to other shooters). Made me think about the Gestalt conversation with Matthew only a few days earlier.

It was growing uncomfortably loud, a distraction that totally disrupted any attempt at casual conversation, so I moved right to the questions:

What words, council or wisdom do you want to share with the world?

Simple and to the point, Wence replied. “Treat everyone the way you want to be treated, and never judge a man by his looks?

Where do you see yourself in five to ten years?

“Somewhere better in making my mark in the world as an individual?”

Initially, I viewed Wince as a huge presence, even intimidating. But as I spoke with him I came to see he was a man contrary to my indirect assessment. He was a man of sensitivity and artistic vision. But what struck me deeper was the relationship he had with his wife (she had chosen not to be photographed). She was close by his side the whole time and I could fully sense the connection they had with each other. At that moment, Wince was still the huge man I first saw, but above that shone a light I did not see at first. The light of a man of great humility, a man for whom family was priority and art was in his heart.

Wence, my brother, you taught me again, Never judge a man by his looks?

Interview over, and escaping the fall less than sporadic raindrops, we exchanged our final farewells. I retreated curbside in path back to my parked car. Then he hit me from out of view, “What’s up?” 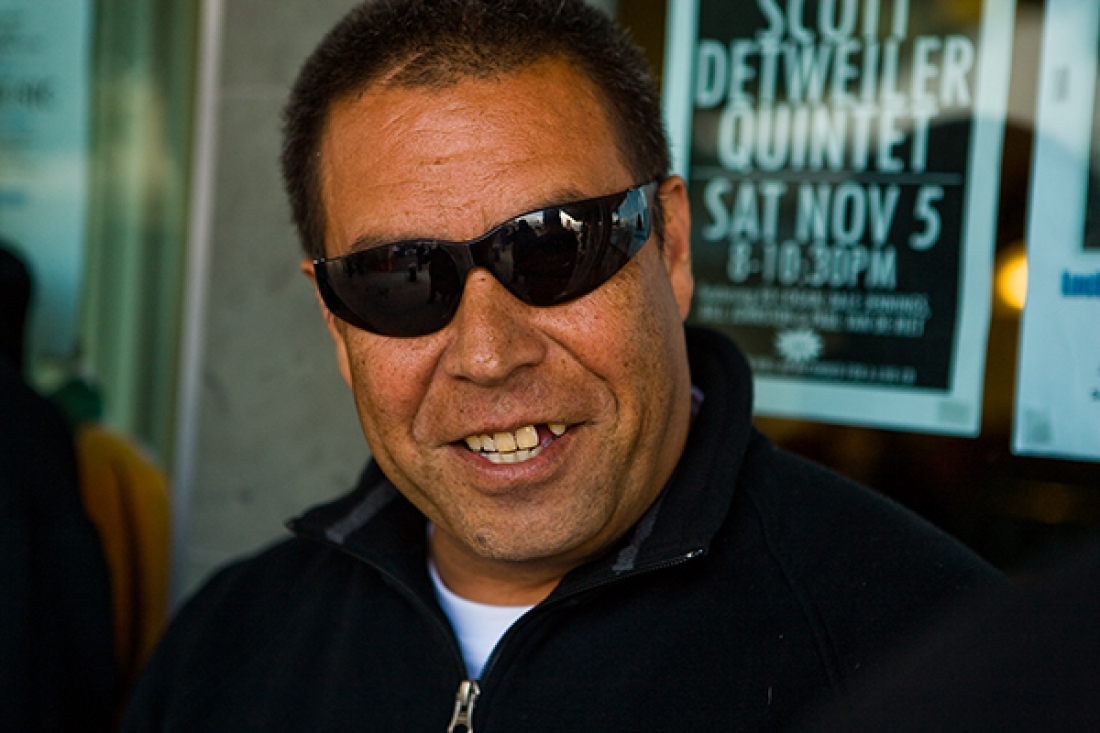 His name was Mat, who watching the whole exchange between Wence, his wife, and I had grown curious as to what we were doing. And to top it off, Matt was not alone. Leaning against a wall, taking in all, was his band of friends, Armando, Benny, Arnold, and Junior. Guys that, whom on any other day, most likely would have alarmed me. Thinking, who in their right mind would voluntarily stop to be surrounded by a gang of people they did not know. Especially when it looked like any singular one of them had the ability to inflict harm.

I turned the question back to Mat, are enjoying a celebration day?

Turned out that I had stumbled into a reunion of sorts. Friends, who standing outside of a local hangout, Henri’s, had gathered to catch up. The same place where only a few weeks prior I had met Nikki and a destination where San Fernando Valley dwellers had come for home-style food, drink, and evening music. It was no surprise that these ambassadors of the Valley (you’ll see why as you read on) had chosen to base themselves there on Dia De Los Muertos.

Matt took the lead in the conversation. My eyes were opened to history not only of the Valley but also of his background and determination to overcome a sketchy past. The guy had heavy roots and told me stories of the area tracing back to the early seventies. I’d seen many photographs and read countless articles about San Fernando Valley, but Matt brought them to full color, as with the eloquence of a schooled master, he gave me accounts of a troubled past. His stories were real, unpublished, and revealed the trials of a youth emerging out of unsettled streets. He openly expressed, “In seventy-eight, I was a gangster, a hoodlum. But those times are passed me now.” There was a calm in his eyes as he made this claim, and I could see he was lobbying for a better future–an ambassador proclaiming his example of how to restart life.

He brought me up-to-speed on the challenges he was facing and revealed notes about a book he was writing, its working title: Amazing Grace.

Now living in Oregon, he was enjoying a fishing vacation in California. “I come here to see my friends and to get whatever work I can find. ”He told me of his construction ability, work ethic, and of his zero desire to return to his past. Explained the walls he had to climb in overcoming a system he identified as unfair. “We go to prison to make restitution for our mistakes, to be reformed, and to be given skills to re-enter society. The problem is, with two felony convictions, and in this economy, it is almost impossible to find employment. I have no intention to return to my past life, but it is hard.” He concluded, “It is easy to rob, but the higher path is to work.”

Equally as involved with me was Matt’s buddy, Armando; better identified as a man of great smiles. Armando was a grand figure indeed. I felt a little unsure standing by his side and dwarfed by his scale, I must have appeared apprehensive. A feeling that perhaps noticed by Armando, was diminished by the welcoming handshake he greeted me with. With warmth emitted, he shared, “COME TO CANOGA PARK, IT’S A NICE COMMUNITY, WE’RE LOOKING UP!” 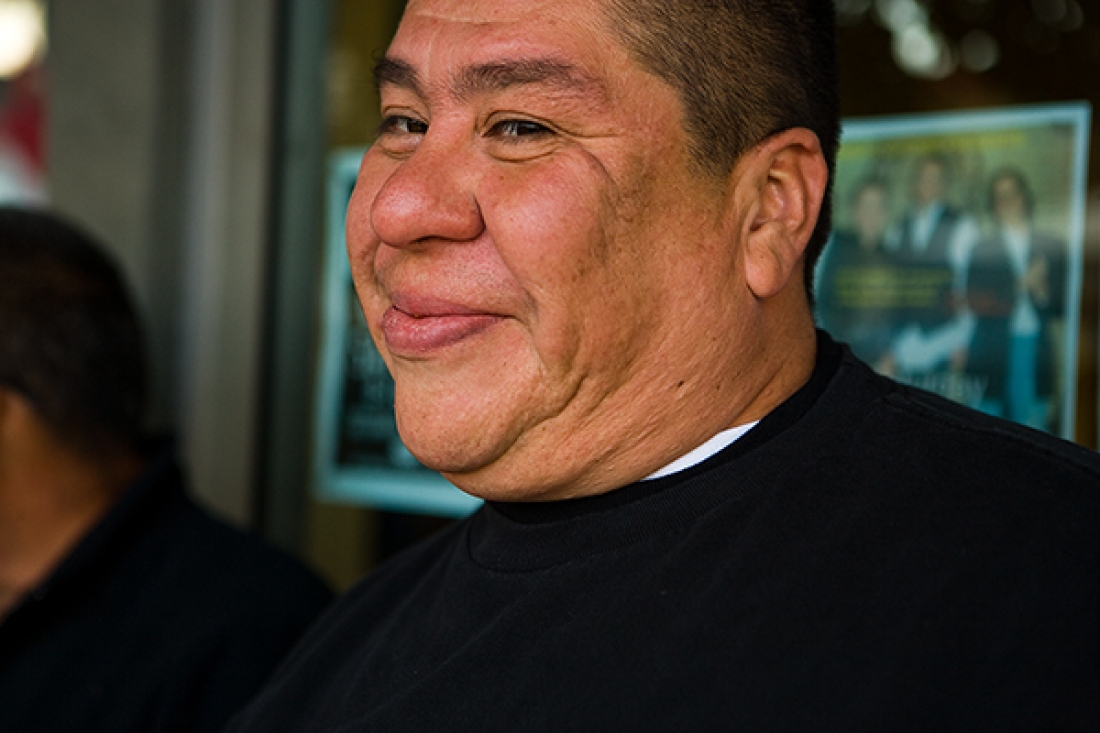 With Armando, it was all about positive energy. His outgoing personality unblemished as endless faces walked by, a majority of whom looked questionably at our gathering. But no sooner than they could look away, they each received the same response from his gigantic and very real smile. A simple, “Hello,” or at times taking a stab at me, “Want your photo taken by a famous photographer?” I dismissed the ego stroke and suggested that he might have been better to offer, “Want your photo taken next to a celebrity?” 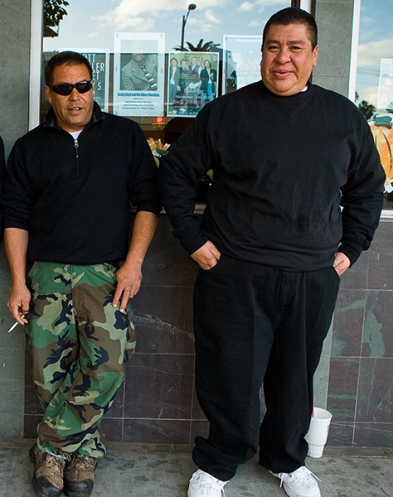 For in my eyes, these men were celebrities. Not the kind we see on TV, but real stars of the community. Men who had firsthand knowledge of dark streets, lived lives of adversity, and had proven that in all, they had the ability to overcome. By the way, they postured themselves against the walls of Henri’s it was understandable why some might have viewed them as a threat, yet the truth was much brighter. A revelation that, as I got to know them, grew into view a significant conclusion: They were watching out for the community and, in doing so, had nothing but good intention to contribute to its growth.

I felt honored and humbled to be in their company–to have been side-by-side with honest men. So there I was, Mat and Armando firing off Valley history and you can overcome anything statements faster than I could record, and as we chatted, I was getting buried with new faces. Armando’s in command attitude was relentless, as during every moment of our time together, his smiling invitation to the world never ceased. These guys had a vast network of mates. Proven as others kept emerging from within Henri’s. Men who, admittedly, had known each other from grade school and through life’s challenges. They were too many to name and, in good conscience, I stayed clear of getting too direct with my inquiries. I did not want to push anyone too heavily for pasts details. Especially, guessing that the majority of them must have had similar histories. Not everyone was as open as Matt and Armando, so I respected there right to privacy. But one thing was noticeably evident; they were all working to better the community.

I had spent thirty minutes with Valley royalty, seen them in action with the community, watched them encourage strangers and youth as I absorbed their message. Loud and sure it was:

COME TO CANOGA PARK, IT IS A NICE COMMUNITY AND THINGS TRULY ARE LOOKING UP!

Gentlemen of growth, I salute you!

BACK TO BLOG
PrevPrevious“Is The World Better Because I Was In It?”
NextMy Story Of FairnessNext

Every moment of every day… your individual impact truly does matter to someone else in the world.

Every moment of every day… your individual impact truly does matter to someone
else in the world.