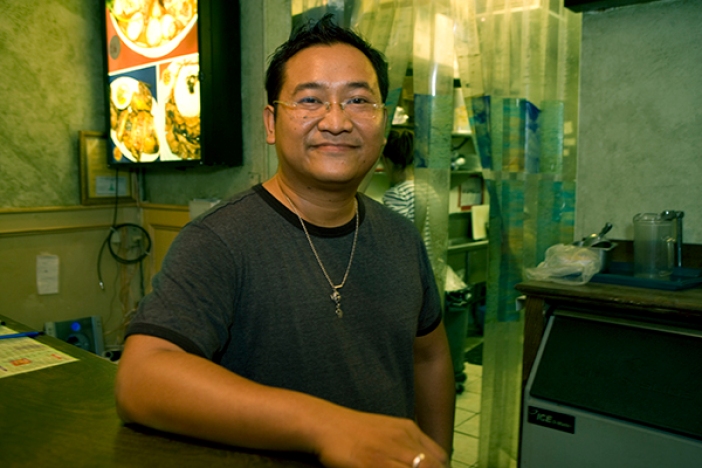 My eyes were watering and the room was a blur. It was 6pm and deep in pre-production for an upcoming project, I’d barely eaten on a day that was wonderfully insane. I’m a little crazy in the fact that I love days like that; they keep my mind nimble and my creativity flowing. Plus, I was fortunate to be working with my favorite collaborator, my wife; and a good friend and very talented animator and illustrator, Brandon. Together they were helping me put the finishing touches on a set of perspective sketches for an advertising project I was directing the following week.

It was day eleven of my stranger-meeting challenge. My goal of interviewing a stranger before my midnight deadline was rapidly approaching, and beyond the pressure of the work at hand, was a growing growl in my stomach. Grabbing my camera bag, (as I always did when going anywhere), I decided to take a walk to my favorite corner eatery, Lemon Grass Thai Restaurant, a cool little joint around the corner from me.

Out the door I went, wife and Brandon deciding to stay focused on their tasks, as I promised to return ASAP. Just had to eat something or who knew what my blurriness would transition into. Plus, I can get a little moody when I start to sugar crash. Thought it wouldn’t take me too long, only a couple of minutes walk, I told myself, as I prayed I would meet a stranger on the way there. I rounded the corner, paced a couple of blocks and as I approached Lemon Grass, leaning against the wall, smoking a cigarette, was Otto. I looked at him apprehensively, “Who is this guy, and why is he loitering in my neighborhood?”

But there were lessons that 365 was teaching me, and one of greatest was to not assume anything about a person until I met them face-to-face, so I approached him, staying aware of my surroundings and not getting too close into his space. Introduced myself, I told him I was on my way to eat at Lemon Grass, about my project, and invited him to be part of it. He smiled an energetic smile, “I am the owner of Lemon Grass.”I tested the statement a little as we talked about the menu. He seemed legit, inviting me to enjoy the food. By that point my body was aching from the 45 pounds of camera gear on my back and I needed food, so I asked if we could take our conversation inside.

With an amusing attitude he agreed and into the restaurant we went. We sat as he told me of his signature dish, Lab (a spicy beef salad). The dining room was empty and other than the server taking my order, we were left alone to chat. The only interruption being an occasional look out of the kitchen from what looked like one of the cooks. Seemed normal enough to me as I dismissed it as their being aware of where the boss was.

Otto nodded to them as they withdrew back into the kitchen, the phone began ringing with what I guessed was a rush of incoming take away orders. He turned back to me, “Try the Lemon Grass Tea, it’s a cure for joint pain,”as he shifted to a conversation to healthy eating. A few more minutes passed, the cooks emerged again, at which point, Otto excused himself, asking if we could take the photos in 30 minutes. He disappeared into the kitchen right on queue as my food arrived.

As promised Otto returned 30 minutes later, asked if I enjoyed my meal, which by then I had devoured. He said things were starting to get busy and it was a good time to quickly take his picture. We shot a few frames, and leaving back into the kitchen, he shared his last words, “Next time you come, order to Lab, and ask for it Otto style.”

Four weeks passed and on a much more sane day, I was once again having a Lemon Grass craving. This time my wife was able to join me. We sat at our usual table. Our favorite spot right across from a tropical fish tank that I give credit for my never wanting to order seafood there. Our server arrived and offered us menus. I looked at her and smiled, I already now what I wanted to try. You guessed it: Lab, Otto Style.

“Really?” I responded, knowing I had been duped, as I asked for a menu. A mixture of stupidity and embarrassment filled my heart. He seemed so sincere. Why the deception? Later, as we finished our meal, I found out Otto was a part time delivery person who had moved onto greener pastures, a trade that was nothing to be ashamed of. I flashed back to all the gestures from the kitchen staff, of his 30-minute disappearance, and his need to exit as the phones rang. The story unfolded and I saw clearly.

In looking back, I can’t say that I lost trust in the world that day, but rather, I realized something that has continually been refreshed through the years of Sidewalk Ghosts. After meeting and continuing to interview strangers, I see that we all have insecurities, fears, and histories—the stuff you might say are the ghosts in the closetswe all carry.

I hold no malice for Otto. Quite frankly, the opposite, for in a strange and distant way I feel empathy for a man who, most likely, was battling his own demons, and for whatever reason found me to uplift him—a fantasy he was living for his brief time with me, and if it was time that allowed him to feel recognized as a person, I’m glad I was able to be there for him. So Otto, wherever you are, I hope you are well.

Comments are great too. Really want to hear what you have to share.