“I’m not really one to be photographed, plus look at me, I’m not looking too good. Best not to take pictures of me. But my mom is at Home Depot, she’ll do it when she gets back!” 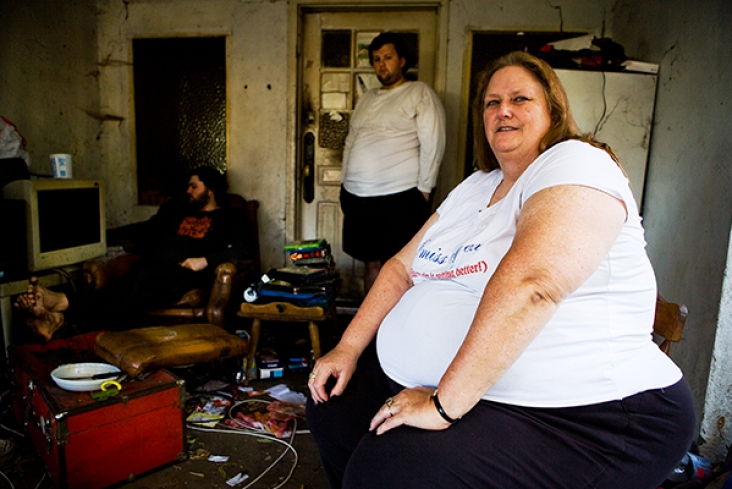 I approached the house, Mike, son of the homeowner, was sitting on the porch; and as I passed by, he threw me a welcoming nod. Subscribing to a chin-up and eyes wide open to the world rule that I was starting to live by, I walked his way.

“Hello, my name is Richard Radstone. I’m working on a project that’s all about community and people. For 365 days, I’ll be photographing one stranger a day, blogging their stories and the experience. It’s been an amazing journey so far. Today I’m on day 45, only 320 more to go. I’d like to invite you to be part of the project. Would you be willing to be today’s interview?”

The door flew wide open as Mike started on a roll of his personal history. Without my questioning, and without pause, he fired at me a relentless exposition of family military history that dated back to the Revolutionary War. So-much-so that, at one point, he went into his house to retrieve a few vintage artifacts. I had barely gotten a word in edgewise, as he returned with a grouping of historical items: Stuff like an 1800’s clock, a helmet and entrenching tool used by his great-uncle during the invasion of Normandy, saved newspaper articles that linked his family to events that occurred at WWII Pearl Harbor.

For certain, Mike was a little offbeat, gave me more than I could chew on, even before I could inquire if he would be willing to be interviewed.Overwhelmed by his unyielding narrative I wonder if he would ever take break from his enthusiastic download of family heritage.

A moment came, when in transitioning to another topic, I grabbed front and center. Asked if I could take his picture. Surprisingly, he declined. “I’m not really one to be photographed, plus look at me, I’m not looking too good. Best not to take pictures of me. But my mom is at Home Depot, she’ll do it when she gets back!”

Sure, that’s going to work, I thought as I pictured the awkward moment when Mike’s mom would arrive home to a strange camera guy in her yard. Figured the story would turn to something like this. What! Are you crazy! Who is this guy you let in our yard! Especially after Mike had laid all of the family treasures out all over the front porch. But in journalistic form, and with a looming opportunity to meet his mom, for better or worse, I decided to take the risk.

Diverting away from having his picture taken, and no sooner than I could read one line of the vintage newspaper article he had placed in my hand, up drove mom.

As I anticipated, she cautiously directed her route toward us. I welcomed her (felt a little strange, after all, I was a complete stranger on her property), and presented my pitch. Without hesitation she was on board.

By the condition of the house, I assumed life was on a downward spiral for the family. Wondered, perhaps a deadbeat parent was in the picture, however, that was not the case. Instead, what I found was a stoic woman who had a purpose, in her words, “Help my children, no matter what the sacrifice.”

Please give a warm hello to Merrihelen.

Merrihelen’s stories and supporting evidence of each topic was endless. More that I could reasonably take note of (an experience that led me to begin audio recording my interviews). Tales that, prompted by Mike feeding her what seemed an endless list of starting points, were articulate and descriptive. It was with heartfelt laughter that she ran with them, and as she did, the family opened up in sharing both deep issues and lighter subjects.

A single mother, Merrihelen had spent her life working to support her daughter and two sons. A reality that, as both he and his family were very transparent and honest in revealing, was expanded with Mike being mentally disabled.

I’ll not sugar coat my observation. The house was very rundown, and it was obvious and that the family was struggling. But what was inspiring was the humor and tenacity Merrihelen demonstrated as she spoke of life and trial. It was easy to see the depth of her intellect as we talked of her family lineage, career path and stories about growing up in Los Angeles.

The most captivation thing: Every story she told was mirrored by her children. Like a passing of oral traditions, she dated her family tree all the way back to the Irish clans. Accounts that by folkloric tradition are to this day verbally forwarded from generation to generation. Seemed that some traditions did not die easily.

From her humble porch I learned of under published California historical facts and acts of military courage. Stories like Merrihelen’s great-uncle, a Corporal who charged Normandy in WWII. His accomplishment? Within the first moments of hitting the beach, all of his division’s superior officers were either killed or critically injured. For five hours, being the highest rank left able, he successfully led the advance of his division. Keeping morale and commanding all until he himself suffered intense burns to his arms and face from an exploding phosphorous grenade. Sound far-fetched? Yep, and I was highly skeptical. That was until her second son, Allan, reproved me. Brought forth his uncle’s bullet worn helmet and entrenching tool; each bearing the marks of a burning explosion. I could have argued the authenticity of the items, but something told me to just let it go as the family went on to share many other stories of war and history. Evidence assured as every one was less vague and supported by historical artifact or documentation.

From a rag-tag front yard introduction I had been entertained and enriched, and when time came to close the interview, I had not even scratched the surface of Merrihelen. For I had gotten to know a survivor who was moving ahead with grace and dignity; a woman who once honorably served California as a Highway Patrol trooper, a person who spent over twenty-five years working at customer service call centers (AT&T, Bank of America), a mother who had paid some serious dues in life, and a provider who, due to circumstance had found herself unemployed and fighting to keep her head above water.

But even in the face of adversity, Merrihelen patriotically stated, “America should remain the land of opportunity.”

All I could think was this, God be with the faithful, hard-working mothers.