“these kids inspire me, when the kids succeed, I succeed.” 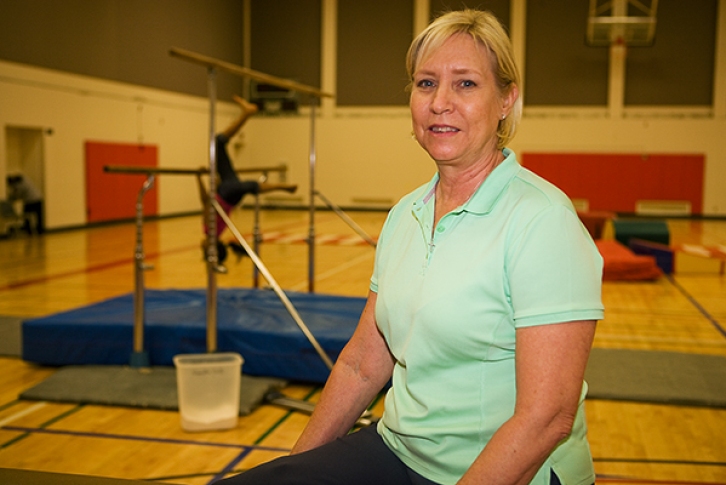 For years my daughter had, on and off, been participating in gymnastics, and with my wandering the streets looking to interview strangers, it had become the norm for my wife to stand in as her companion. But on one particular evening I tagged along, and upon arriving as parental guardian, a consideration entered my mind:I had never introduced myself to Susan, the program’s director.

In the forty-two days that preceded that evening, I had been obsessive in my focus of meeting what I called, absolute strangers. Exhausting as it was, and sometimes as heartbreaking as it could be, my perspective of others was maturing in a very remarkable way. Even my ability to communicate and write was improving. A byproduct I must give credit to the patience and support of my family as they willingly lost part of me to the time requirements of Sidewalk Ghosts. None-the-less it was on that evening of October 22, 2011 I broke a little. Took my first real breather to place the project as second priority. It was fair time to forefront my family life. At least that was my attempted goal. However, I found it an impossible benchmark to feasibly obtain. The project was far too organic to allow me that luxury. It was that night I fully realized the full impact of a commitment far beyond myself, and to be able to hold my head anywhere near the meter of integrity, I had to remain honest to the scope of the project. But like a constant healer, in it was a gift that proved priceless. A tactile realization I witnessed in the outlook of my wife, daughter and friends. Even something that was affecting the person I was. An understated educator and motivator was being given to us. Like an agent of change, it invited us on a journey to new perspectives, that in a most measureable way, were releasing us from a trap of our own making: The subtle isolation that many of us unintentionally create as we forget to pause to look at our neighbors; and on that night, in a college gymnasium I, in a unrequested way, received a profound revelation. For it was not only those I had never seen who were the strangers, it was there were strangers in my daily life, even people that I had casually known of or briefly met before.

With this brain wave as a motivator, I first really noticed my daughter’s coach, Susan. A person who although I knew by name, role and reputation, I did not know at all–a stranger in my midst.

There were kids and parents all around, and with only two assistants, Susan was up to her elbows in coaching and parent management. Her method of peaceful suggestion and firm stay on task communication was quite noticeable. It was obvious Susan was on a defined mission, to help her students excel and overcome their fears; and other than her brief acknowledgement to parents as they uncomfortably wiggled in folded chairs, she was all absorbed in coaching her students. So I patiently waited for opportunity to arise, a moment when I could invite her to be part of Sidewalk Ghosts.

Water break came, and as if a little voice from elsewhere invited her, Susan walked my way. Without smile, but within her expression of gratitude to the parental audience who had entrusted their children to her, she apparently noticed me. So, I reached out with a short hello and explanation of my goal of publishing an essay a day for an entire year. Instantly she was intrigued by the commitment, and in her coaching way, told me to keep it going. In such, and with her students back on the mat, she accepted my invitation to be interviewed, but with one stipulation, “I am about to teach, can we talk after class.”

No worries, I’m glad to wait, I assured her.

I grabbed a mat of my own and began to journal. An hour and a half passed, and other than a little chat with another new friend of the evening, Arney, father to another future Olympian, I’d been typing away in relative silence.

8:28pm arrived, class ended and the gymnasium began to empty. With one part of her mind obviously directed to all that was happening in the shutting down of the gym, she was a touch aloof in her time spent with me. But in short testaments she spoke volumes. I carefully listened and took notes.

I arrived home at 10:41pm, and even though I had made a stellar attempt at writing a story at the gym, I realized I had much more to tell. Susan’s coaching had affected me, and in fairness to her, it was my responsibility to express exactly how. I set aside my dreams for a computer free evening, and feeling beyond thankful for support of my wife, who in the other room was getting our exercised and cookie pumped-up kid to sleep, I recorded my review of the evening.

Since 1979, Susan had been involved with training youth in gymnastics. Reserved, focused and committed to service are probably the best definitions to tell you of her character. But, what really impressed me was Susan spoke nothing of herself. Her responses wonderfully selfless, and even though she emphasized the importance of the program she directed, she never spoke of herself. Choosing instead to reference the power of community and the importance of inclusion.

“This is a non-profit, a nice place to work, so kids without lots of money can have the opportunity to take gymnastics. Our classes are for the community,” Susan explained. Her countenance void of boasting and without any positioning for personal gain she comfortable redirected away from herself. Yes, Susan was a rock star coach!

Truly putting her students first, and after intently observing her coaching style, I can honestly say, all Susan desired was to see her students succeed.

We finished our interview, gym empty, I asked, are you sure you don’t have any words of wisdom to impart to the world?

In perfect Susan style, again it was about the kids and her class, “Parents need to let me do what I do, especially with the very young children. Sometimes there is a little disorderly conduct. I just go with it and real them back in. You give a little, you receive a lot; so parents, please let me do what I do.”

Her final words, “these kids inspire me, when the kids succeed, I succeed.”

To all: please comment,like, and forward. Every engagement goes a long way toward connecting us; as together, we grow a movement that betters the way we view and treat one another.